Is it okay to write about a space that’s unfinished? Um, OF COURSE! I’ve been doing a lot of reveals lately (like two lol) but the one space that I haven’t shared more than a few snaps of, is our bedroom. Not because I don’t love it, but because it’s not quite where I want it to be and to be honest, I’m at a bit of a standstill trying to figure out what the next move will be. The parts that are done, I love, but what’s not finished is bugging me and there are a few decisions that I’m second guessing, so I’ve decided to step back for a second and share the progress thus far. There are things I’m not fully loving and that’s okay! I want to celebrate the yesses while sharing the “ummms” lol.

So often we only share spaces when we feel like they’re perfect. Who’d want to see a half done room? But funny enough, most of my engagement comes when I’m sharing the progress of something I’m working on. If relatability is the name of the game, nothing is more relatable than our real in-the-moment thoughts, struggles, triumphs and my personal favorites, oops, with our community. It makes those finished photos more understandable and gives them a little more character and charm. Knowing that someone took months to find that special piece of art that finished their guest bathroom, makes it so much cooler when you see it all come together!

So let’s talk what I’m loving. Our slat wall! Many of you saw me design, build and hang this baby in my stories on Instagram. It was born out of a desire to be wowed the moment I opened the door. Having the slats be vertical, instantly draws your eyes up and makes the room feel so much taller. It’s a unique element to see in a bedroom (especially in a rented space) when more people, myself included, would hang a piece of large art. Ya’ll know I love a good unexpected detail, so this element was perfect for us! It also helped me to stop obsessing over what kind of art to hang, what size, would I make it or should I buy it, color or no color? Would color be too constricting? Would black and white be too plain? I went back and forth for months until it hit me like a ton a bricks and our slat project began! Of course the honey is constantly afraid of it falling on us in the middle of the night, but it’s been through a very heavy footed upstairs neighbor and two earthquakes (in Georgia) – I think it’ll be just fine!

Let’s talk what I’m not too keen on. So this rug. I feel in love with it when I saw it online. It wasn’t the usual trellis design that’s everywhere, was neutral but not boring and both contemporary with a smidgen of boho flare. I went between two runners or one large area size for weeks and finally decided on the larger, singular choice. We (me, with a little help from babe on his way out the door for work) put in under the bed and the room was instantly transformed. We’d actually never had a rug under our bed so I was feeling like Beyonce for the first few days lol but then it started. One of the reasons I hated our previous runners was because at the end of the day, I’d have to reposition them because just walking on around made them slowly scoot to the end of the bed. Where were they going, lol and still til this day I don’t know why they weren’t scooting the other direction, why was downward the preferred movement? ANYWAY, the same thing is happening to our new rug. Even though there are a total of five legs holding it down, the ends that we walk on now looked wrapped because they’re slowly being moved down with every step we take. Ya’ll, it’s driving me insane.

I don’t want to use rug tape because I’d heard it can damage the underlining carpet and being that we’re renting, I don’t want to screw the rug to the floor, so I don’t know. I wish I’d known this would happen in the beginning because honestly, I would have kept rug shopping with runners in mind. Yes, I’d have to constantly move them, but to move this one big rug, I have to take the entire bed apart which I’ve done multiple times before I realized what was happening. They say you live and you learn, so I’ll just put this in the learning pile until I’m up for rug shopping again. I still really love it and I know why it’s doing this, so when we move the rug will definitely come with us. It just won’t live in the bedroom anymore.

Now for more good. Our clay art wall! I think every room has that little space that says “yeah, just throw a tree in here and call it a day” but I refused to listen to what this corner wanted. We pay the rent so we’d make the decisions ’round here. If ya’ll know me, ya’ll know that I somehow manage to build a bench every two to three weeks, so of course I had to put one in this corner! It was effortless. Now what wasn’t so easy was figuring out what to put above the bench. Making canvas or painted art makes me nervous because I’m so fickle on color but I don’t like boring, simple spaces. What was a girl to do? How can I have something neutral in color that’s still really cool to look at? Enter the “clam wall”. Using a few canisters of air-dry white clay and small nails, this wall has almost turned into a little gallery space where I still find myself oogling the individual shapes and textures, like I didn’t make them! I placed them randomly with an overall shape in mind and really couldn’t be happier with how they fill the the corner! I think I paid less than $10 for the entire project and had so much fun making them. I’d originally planned to paint them white but loved the natural ivory color of the dried clay.

Now for the “biggest” thing bugging me in our bedroom, something I can’t even bring myself to capture in its entirety on camera lol….our enormous blank wall. I’m definitely not someone who thinks every wall needs something on it but I do think that our HUGE white wall, opposite of the window, could use a little love. I’ve circled the idea of hanging two large framed pieces of art but why Shae, just why. I’ve considered buying art from local artist but the way my ‘mind changing’ is set up….I just don’t know! Right now the wall is completely empty, except for a few nail holes from previous attempts. I even thought of doing a sort of tapestry piece or something with yarn but I’m just not sure what that looks like exactly.

Like I said, I’m at a standstill. There are a lot of ways I can fill this space but it has to fit quite a bit of criteria. It needs to be interesting while not overtaking the slat moment, while also being something but I actually want to see on a daily basis while not just being something random to take up the space. So right now I’m resolved to leaving it as is until I find or make the perfect piece. I have no idea when or what that will be at the moment and that fact will not kill me. I’m guessing it will hit me randomly while I’m brushing my teeth and I’ll wonder why I didn’t think of it sooner.

So you see, social media tends to make things seem polished but every space isn’t always nicely tied up with a bow, sometimes, projects are unfinished. Even when you’ve seen a reveal, there may be things that you don’t even know you’re not seeing, things the designer hasn’t shared. I’m okay with our bedroom being in the “progress phase”. In the meantime I’ll celebrate what I love about this space. I’ll be happy about the design moments that I’m obsessed with and how they make me feel when I walk in. It’s unfinished and that’s okay.

One thought on “BEDROOM REVEAL: UNFINISHED AND OKAY” 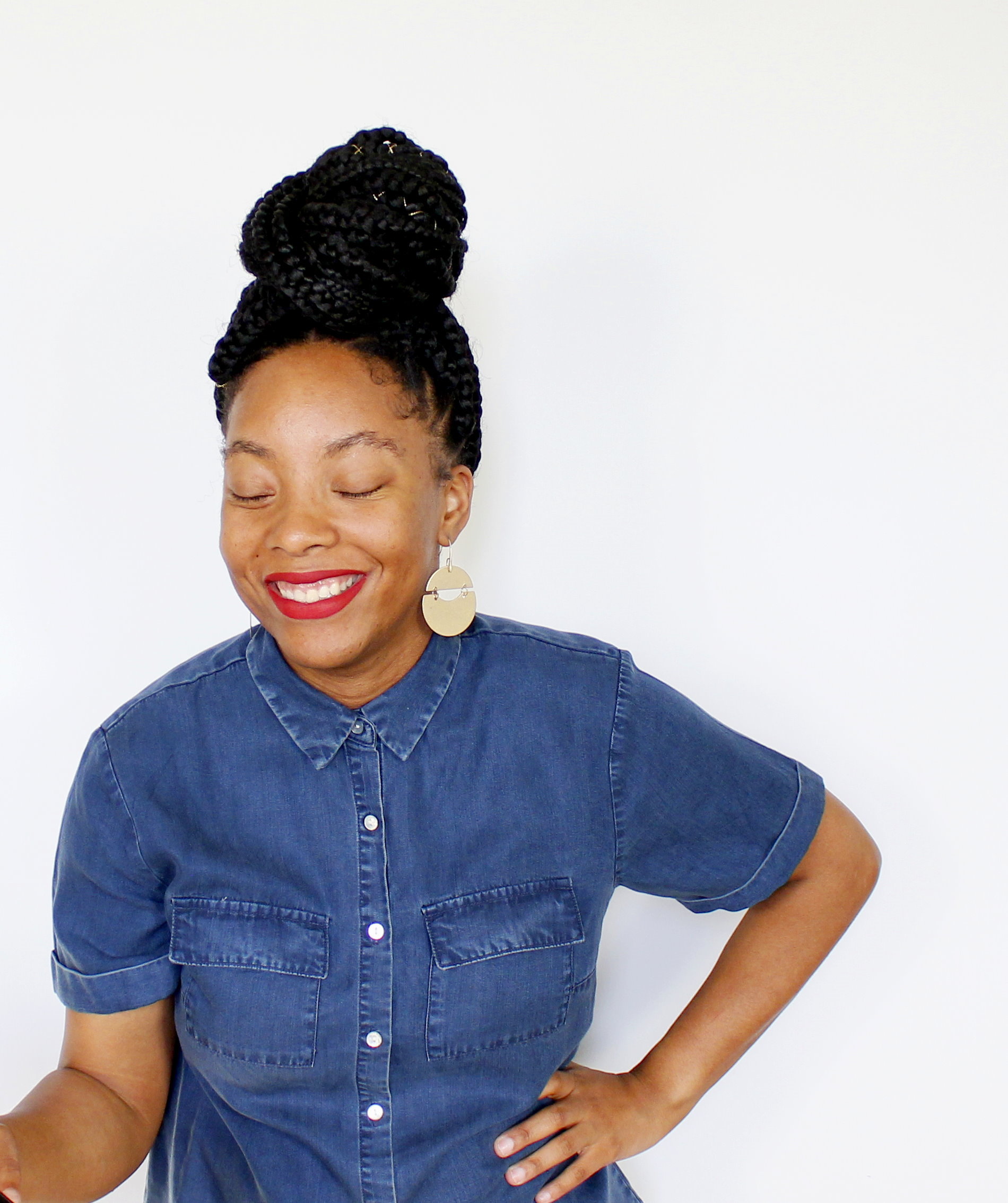 Hi! I’m Shae, interior stylist, creative space maker and loud laugher all rolled into five feet, two inches. I’m tiny but mighty and spend most of my day either “making things look pretty”, at my day job or building something from scratch for our home.

I’m currently decorating our 800 sqft apartment and sharing every “yay” and “oops” moment with my style tribe (that’s you)!  Hopefully I can inspire you to add more made to your spaces while creating a home, unexpected.

Be sure to follow along on my Instagram as that’s where you can catch me sharing daily stories, easy DIY projects or as of late, documenting my journey of getting braces at almost 30!

I love collaborating with amazing people and brands. I don’t bite so feel free to reach out to me at shae@skoopehome.com

Did you know that I offer interior design services? I even help with Airbnb styling and e-design. So whether you’re local or in another country, let’s chat!

So now that you know, you can never un-know, so don’t hesitate to reach out to me for your next design project, big or small, near or far. Don’t say I never told you. Just click the square below to get started!